Has your site been hit by Google Penguin?

Google changes have been coming fast and furious. Over the last few months:

Google Panda, first released in February 2011, was aimed at lower quality sites. Sites that had thin content, too many ads and overall less useful content saw their traffic drop, sometimes by large percentages. Google has continued to release updates to Panda over the last year, and sites continue to suffer from it.

Google Penguin, is an whole other thing entirely. Its goal is to weed out sites that have been engaging in building “over optimized” (or less charitably – spammy) backlink profiles. This post will focus on detecting a Google Penguin penalty – but the techniques I outline here are useful for detecting an unfavorable impact on your site’s organic traffic for any of the Google changes (algorithmic or otherwise) that roll out with regularity.

What does a “unnatural” or “over optimized” backlink profile look like? Lots of links that have “perfect” keyword rich link anchor text coming from lower quality sites, particularly sitewide links in the footer or in the “blogroll” sections of the sites.

How to check if a Google change has impacted your site

I’m going to assume that you have Google analytics set up on your site, but you should be able to use other analytics software.

First – check your Google Webmaster Tools messages (if you haven’t already) – if you see the dreaded “unnatural links” message – chances are you’ve been hit by Penguin. Although Penguin had a release date, reports by site owners that received the message indicated that some sites saw an impact as early as late March. 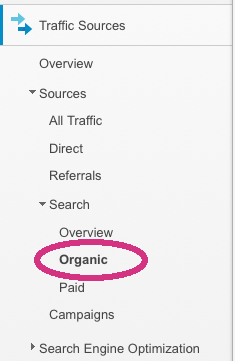 Like a lot of things in Google Analytics, there are a number of ways to segment out your Organic Traffic for viewing. But the easiest way to do it is to navigate to Traffic Sources –> Search –> Organic in the menu on the left side.

Alternatively, a more advanced technique, is defining a custom segment where you can specify to include the dimension “Medium” to contain “Organic”. Custom segments are useful because you can turn them on anywhere in Google Analytics to filter your data.

Regardless, what you are using, now that you are looking at organic traffic, adjust the dates to look at your organic traffic over the days April 19, 2012 (Panda) and April 24, 2012 (Penguin). If you received a message about “unnatural links” you should start from the date of that message. If your organic traffic is normally erratic, you may need to switch to a “week” view, but generally the “day” view is best.

If you are a brand or a well known personage, you will also need to filter out your “branded” traffic, for example the name of your site, a product you sell or your name. Google algorithm changes and penalties generally don’t impact your branded organic traffic, and if you get a lot of it, this may obscure any change in your keyword based organic traffic.

To filter out your branded terms, start by click on the Advanced link that is under and to the left of your chart. This will reveal a dialog similar to the custom segment one where you can specify the keyword terms to exclude.

These techniques are handy whether you have been impacted by a Google change like Penguin or not. Take some time to play around with Google Analytics, there is a lot of power in the tool, and even if you use just 20% of what is available, you’ll be far ahead of your competition.

Some WordPress theme developers are reporting that Penguin impacted them due to all the links back to their site from the link (eg: “this theme developed by …”) embedded in their WordPress theme. Embedded links are not limited to themes, sometimes they show up in plugins as well – as hidden links! Hidden links are against Google quality guidelines so these can impact the site that installs them as well. Here’s a a post with a list of plugins that may be causing problems.

My site are badly hit by penjuin update that occur 24 april,many of my keyword on page first but not anywhere in Goolge.I dont recieve any unnatural link profile message in Google analytic tool.Advice me what i do to come back my site to its normal position and how much time it will take to come back.
Kind Regards
George Bil
GED Academy

Just because you didn’t received a message in GWMT doesn’t mean you weren’t hit by Penguin. It just means that in your case it was an algorithmic penalty (ie. no human reviewed your site and decided your backlink profile was spammy). So filing a reconsideration request will get you nowhere. You will need to fix your backlink profile to reduce the number of low quality or spammy sites that link to it, eliminate any paid posts and reduce the amount of exact link anchor text backlinks. So this means contacting sites and asking them to remove links. Unfortunately this won’t get you back to where you were as your previously good rankings were due to those links that are now hurting you – you’ll have to build newer high quality backlinks to completely recover.

To add to the above, when you are looking at your organic traffic, you may want to add “source” as a secondary dimension so you can see which SE (Google, Bing, Yahoo) is sending you traffic. In penalized sites that I have looked at, the only Google traffic was coming from logged in users (the not provided bucket).