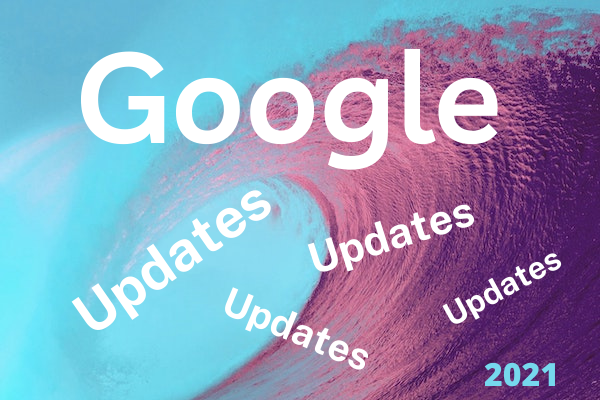 You never know what’s going to happen when it comes to SEO, but 2021 stands out. Compared to 2020, we had more than 6 confirmed Google Updates and even more unconfirmed updates. Google also made some refinements to rankings and to how the SERPs (search engine result pages) work.

This post was updated December 30, 2021 because even more Google Updates occurred after it was first published!

Not only did we have the two back to back Core Updates in June and July, we got several Spam Updates, the Product Review Update, and the Page Experience rollout for Mobile for a busy 2021 “Summer of Updates”.

Per SEMrush, desktop results for January 2021 through October 2021 had 68% more high volatility days than in 2020. Mobile was even tumultuous with 84% more volatile days.

2021 also saw Passages Ranking, the final phase of Mobile Indexing, and a change in how Google generates web titles.

The latter caused consternation among SEOs and a flurry of tweets showing examples of crappy web titles in the Google SERPs snippets. Below is an example where Google got it wrong even for its own web site.

Fortunately Google adjusted the system in September and it has been performing better.

So much happened in 2021, I found myself losing track. Accordingly, I created this post as a reference for myself and others.

(Literally as I am pushing the Publish button on this post on November 17th, there is another Core Update rolling out …)

Originally named “Passage Indexing”, Google’s Passage Ranking doesn’t mean that sections of your page are indexed separately but rather that a section of your web page such as a paragraph may help your page rank.

Think of it as a change that will help long pages (that you might sit down with a cup of coffee to read) rank for more long tail keywords.

Danny Sullivan under the Google Search Liaison Twitter handle announced Passage Ranking had been launched for English countries on February 10, 2021 and that it would launch for other countries soon.

Searchenginejounal’s interview with Martin Splitt is a good place to learn more.

March saw the completion of a multi-year transition by Google to move all sites on the web to mobile indexing.

The transition to being primarily crawled by Googlebot Smartphone can impact your site in sometimes surprising ways. Sites that serve different HTML (or URLs) for mobile compared to desktop have to be careful not to omit links and content on the mobile version.

I consulted with a client that lost all of his Google Job Postings because the mobile version of his site lacked the JobPosting Structured Data.

Check your Google Search Console Crawl Stats report (found under Settings). You should see Googlebot Smartphone as the primary crawler for your pages. If you see Googlebot (Desktop) with a significant crawl percentage, you may have issues with discrepancies between the mobile HTML and the desktop HTML of your site.

The intent of this update was to surface pages with higher quality product reviews instead of those on thin affiliate sites. Google wanted to reward “in-depth research rather than thin content that simply summarizes a bunch of products”.

With this Core Update, Google announced it would be split into two, one in June and the other in July because some features were “not ready yet”. This was a first from Google as Core Updates are usually separated by several months.

Another unusual aspect of this Core Update is that its impact wasn’t immediately felt, until the weekend (June 5th and June 6th). Core Updates are broad updates that can impact a site based on many factors, this one (and the July Update) were no different.

With any Google Update, you should take a look at your organic traffic metrics in tools like Google Analytics or Adobe. If you see a dip in your traffic correlated with a Google Update rollout you’ll need to investigate further to determine what pages or site section was impacted the most.

If you are new to Core Updates, start by reading Google’s “What site owners should know about Core Updates“

Prior to this rollout, new reports: Core Web Vitals and Page Experience were added to Google Search Console to help site owners prepare.

This was a long and very slow rollout that did not complete until September 2, 2021.

While this Update was pre-announced over a year ago by Google, potentially signaling a large impact , both Martin Splitt and John Mueller of the Google Search Relations team noted that site owners shouldn’t expect drastic changes to rankings. While this is mostly true, the impact was noticeable in a few cases. I know of one site that has lost mobile rankings as a result of their poor Core Web Vitals.

We aren’t done yet with the Page Experience Update, Google recently announced that the Desktop version will start its rollout in February 2022.

If a Core and a Page Experience Update wasn’t enough, June was capped by a pair of Page Spam Updates that impacted Web and Image search results.

If you think you have been hit by a Spam Update, read through Google’s Webmaster Guidelines to see if your site is in compliance.

Like the June Core Update, the rollout was shorter (10 days instead of 2 weeks). Even though these Updates were right next to each other, each update impacted sites differently. I saw one site get a double impact, one section of the site was impacted in June, and then to add insult to injury, another section was impacted in July.

Overall, many SEOs believe that the impact of the June Update was larger than July.

Much has been written about Core Updates, including the role of E-A-T (Expertise, Authority, Trust) in Google’s evaluation of quality at a site level during the Core Update.

One of the more interesting aspects of Core Updates is the impact they have on certain sites and industries, for example in many of the Core Updates over the last several years alternative health sites have not done well.

Amsive Digital published a winner and loser list for the July Core Update (there’s a link to a similar list for June in the post). It’s interesting to see some of the English sites based in our countries (Canada, UK) lose ground.

There’s a difference between unnaturally placed links (such as sponsored links) and link spam, and it’s helpful to understand the nuances between both. Link spam is created by Splogs (spammy blogs), “SEO sites” and PBNs. These types of backlinks are target of Google’s Link Spam Updates. These Updates may also pick up sponsored and other unnaturally placed links, which may result in a Manual Penalty. Manual penalty notices can be found in Google Search Console.

Google released a Link Spam Update on July 26, with a 2 week rollout. This was announced via a post “A reminder on qualifying links and our link spam update” that included recommendations on using rel=”sponsored” for affiliate links (presumedly rel=”nofollow” is still acceptable).

Guidelines for Guest Post “strongly recommend” using the “rel attributes”, with this caveat for no=”follow” on the linked page. “If you want to recognize and reward trustworthy contributors, you might remove this attribute from links posted by members or users who have consistently made high-quality contributions over time.”

Google is clearly expecting that guest posts pages use the no=”follow” tag for attribution to the author page, except in rare circumstances.

The title tag is the most impactful HTML tag when it comes to ranking your web page. While it’s true title tags are not as powerful as they once were, it still is worthwhile to craft your page’s title tags to not only rank but to also get the click.

Google has always rewritten title tags if it thinks it can create a better one, especially for some queries. However in August, it adopted a new system for generating and overwriting titles that was no longer based on the query. In Google’s words: “This is because we think our new system is producing titles that work better for documents overall, to describe what they are about, regardless of the particular query.”

However the new system had some bugs. It seemed to prefer to use pages’ H1 tags instead of the title tag. I saw many examples of Amazon H1s “Results 1-48 of 1000 – Mirrors …” used by Google for web titles for transactional searches.

The good thing is that Google listened to the feedback and improved the web titles used in the SERPs. On September 17, Google updated its first post to announce that the system had been refined and also provided guidance in a second post to creating good title tags.

How do you know if Google is overwriting your title tags? You’ll need access to a SEO tool such as aHrefs which allows you to view the SERP for your keywords within the tool. Of course Googling with your top keywords helps as a spot check.

You can now scroll the Google search results on your phone, just like you do with Facebook. Google’s new scrolling feature for the mobile isn’t infinite scroll, it’s continuous scroll. If you scroll enough you’ll eventually get to a Load More button.

With this announcement came speculation on SEO Twitter that this would influence the CTR (Click through rate) patterns in favor of listings that previously required a “Load More” tap. No interesting studies have yet surfaced, but keeping an eye on my site’s position spread is what I’ll be doing.

As I write this, the Updates keep rolling out.

Google has released another Spam Update that rolled out from Nov 3 – 11, 2021. The Page Experience Update for Desktop has also just been announced for 2022 which I cover in June above.

Would you like another Product Review Update? How about a Local Update?

With the holidays approaching I had hoped Google would slow down and give us a break. Unfortunately no such luck.

Also Google belatedly announced that it had also rolled out an Update that impacted local search and the map results. This update started its rollout on November 30th and completed December 8th.

Searchengineland named this Update “Vicinity” because the Update appeared to adjust the weighing of proximity to the business, in that the further you were away from the business the less likely it would be a top result for your search.

It was certainly a big year for Google Updates, I wonder what 2022 will bring?