UPDATED POST. A while back I wrote about adding an opt-in box to Facebook. It makes a lot of sense for most businesses. Most likely you have more activity and conversation on your Facebook fan page than on your website, so it’s a great place to have people opt into your list.

In the post I walked you step-by-step in creating a FBML page and placing the opt-in code on the page. It worked great, until Facebook did a major upgrade and deprecated FBML. You can no longer use FBML as of March 11, 2011. If you already have FBML pages they will work for “a while”. But that meant my post was out of date. So here’s the new version of the post.

So what’s the new way to do this? Let’s understand what Facebook did first. Facebook did away with FBML which you used to code directly on Facebook pages, but instead greatly expanded the ability to pull in functionality via the apps concept. Essentially you can run code that is hosted on your own servers and use Facebook to present your own tailored pages via iframes. It’s a nice concept and much more flexible than what was available before. This is a huge boon for businesses that have web development resources. They build cool stuff, deploy it on their servers and then pull it into their Facebook pages by registering it as an app.

But where does that leave the small business who struggles just to keep their basic business website updated? Kind of in the cold.

But for some common needs, such as adding a opt-in box to your Facebook page, your ESP (email service provider) has stepped into the gap. The good news is that those apps make it easier to have an opt-in box in Facebook than before.

To start out you need to have created a Facebook page and have signed up with an autoresponder system such as aweber or a email service icontact. These email marketing systems manage your list that you send your ezines and offers to by email. Both have created an app that you need to install into your Facebook account. With AWeber (and with the other ESPs) it will go smoother if you already have a list and webform set up.

I installed a AWeber form onto the Webenso Facebook page (which is not exactly ready for prime time, but is serving as a useful testbed for me). AWeber does a good job of walking you through the eight steps that are needed so I won’t replicate them here. It even gives you a link to locate the app in Step 1 (which is good because I couldn’t find it through the apps search function in Facebook). One odd thing that was not mentioned was that I had to switch back to my personal profile from my page profile to complete the installation which was strange but worked.

If everything goes well, you should see the AWeber app listed in your apps list as shown below (I also see it in my left nav on my home page). 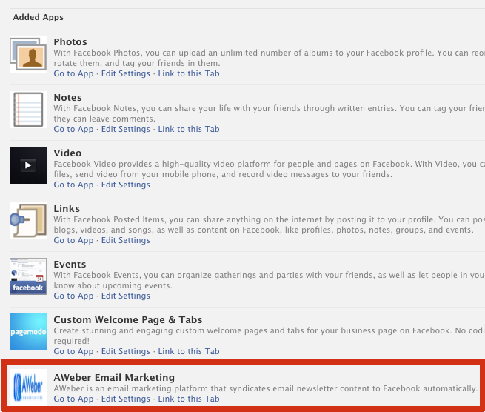 Don’t forget to do the last step “Edit Settings” (last part of Step 8), otherwise you will not see the “tab” on your page’s left nav bar which may be disconcerting. A nice bonus is that you can name the tab anything you want.

I used existing web form that I had already created for a website, however a Facebook page has a lot more space on it, so you should consider creating a new form for your Facebook page. However you will need to create it in AWeber first before installing into Facebook as it needs to appear in the webform dropdown list in Step 7.

The iContact installation instructions are similar.

For other ESPs, just try typing in your ESP name and “Facebook” into Google or Bing. BTW, I’m finding that Chrome and Facebook don’t play nicely together (the cynic in me wonders why…). I used Firefox instead to do the installation instead.

Let me know your experiences with ESPs other than AWeber.

Thanks so much for this. I have only just started my facebook page (http://www.facebook.com/LouLovesLearning) so will leave this window open and put this on my to do list for later today.

I love to learn something new everyday – thanks!

Thanks for sharing this. I am so surprised the more business owners don’t have a Fan Page. I heard a statistic recently that there is less then 200K businesses with a Facebook Fan Page. Could that be true?

Kathy,
I am just learning to design my website & add other social media. It’s all still mind-numbing to me! Thanks for the heads up on more thing I need to learn!

Thanks for the post…I use an opt in box on my fan page and often get more traffic there that on my website. Keep the info coming.

We just launched a Fan page for our business a month or so ago, and this is all pretty new to me. Thank you for sharing your expertise!

Darcie,
I’m not surprised you get more traffic with your page, I’ve heard that from other businesses. I believe it is because you have the benefit of a big PR (high ranking) domain (facebook.com) to boost your page!

An opt in box for my fan page sounds like a great idea. I will definitely have to make it happen.
Thanks for the tutorial.

This is awesome. I’ve seen so many posts on Twitter about this but it something you have to pay for. Thanks for showing how to do it for free.

I don’t have a fan page but am going to bookmark this for when I do.

Chrystal,
I think Facebook Fan pages are still pretty new to most businesses. I’ve talked to larger corporations that are not doing much with social media, their attitude is to sit back and see where it goes. I’m not sure how many fan pages are out there, but check out this list of the top 30

Such a handy post, I clipped it to Evernote. Thanks for the clear and concise How To!

This is fabulous! Thank you so much for the step-by-step explanation! Actually, I got lost after the edit your page part… so will have to study this. I really appreciate it as a valuable tool! Thank you!

When you edit your Facebook Fan page (“edit your page” under the picture on your fan page), do you see the FBML application in the list? (you’ll need to scroll down past the settings to the applications list). Once you find that (it won’t say “Free Report” like mine does just FBML application) then click on “edit” and proceed with step 3. Hope that helps!

like others above, i don’t have a facebook fan page yet because i’m still working on getting my blog up + live, but will definitely bookmark + revisit this when the time comes!

Can I do a Vulcan mind meld and suck all the information from your brain! Thank you for easy understandable tutorial. Can’t wait to hear more from you in the coming weeks.

Ooh – I like this. I’m marking this with Read Later so I can find it when I actually have something for people to opt in to. That’s somewhere on the to-do list

I love this idea. I will have to add this soon. I love your explanation. You are right we seem to have more traffic on our Facebook page. Our audience on Facebook is different than the ones that go to the site.

Glad you like the info. Let me know what other topics you are interested in, so I can do more blogging!

Thanks for the information and the reminder. I have a “fan” and I am often at a loss when to use it; you got me thinking about giving it a little more love and attention!

Thanks for these instructions, surely they will come in handy when I learn what I’m doing. So new to social media not yet ready for this step.

This is the 2nd occasion I have come across your blog post in the last couple weeks. Seems like I ought to take note of it.

Thanks for the easy step by step explanation on how to add an opt it page. FB won’t let me add a tab. The only tab it will let me add right now is videos (which I want to do too.) Any ideas on what I have to do?

Well Facebook has certainly changed around things since I wrote this. It’s hard for me to check into as Facebook only allows one FBML per page and many apps are not set up to be tabs.

Do you see the FBML app in your app list? Is this a fan page or some other type of page?

Thanks for the information on how to maximize your fan page. Have you done the opt-in box within a png file to create a full graphic? I have seen this done, but not sure how to do it.
Steven

Hi Steven,
No to be honest I haven’t. In any case, this post is rapidly becoming out of date due to the recent Facebook Fan Page upgrade which does away with FBML.
However I can provide some guesses on how to it. With FBML going away you can check into iFrames or just straight HTML. So you might be able to reference an image hosted on your hosting account. Or what I would look into doing is hosting both the image and the opt in code on your server and pulling the functionality via the app feature. Hope this helps.