Panda: The Google Algorithm Change That Everyone is Talking About 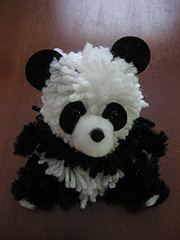 I’ve been asked by a couple of people why I haven’t written about the Google Panda algorithm change which was a major event in the SEO world. I like writing useful articles, and when practically everyone in the search industry (not to mention mainstream media) has written about it, what more could I contribute? And actually, I have written about it, but as guest author.

From the Huffington Post, to the Wired Interview with Matt Cutts and Amit Singhal, to every SEO pundit; there is no shortage of reading you can do about Panda. So instead of getting into the weeds like everyone else, I’ll write about it from a more overview perspective for the non-search geek.

For steps to take, check out my guest post on Panda.

Google is constantly making changes to its algorithms it uses to create the search results you get when you type in a query. Most of these changes are not noticeable. But every so often a big change comes along that people notice, especially the webmasters when they look at their traffic stats and see a drop. Google estimated that almost 12% of search queries were affected when Panda rolled out its US only February 24th debut (it has since been expanded to the UK and other countries).

Why all the noise?

Panda was a big deal in many ways. First of all in its impact. Due to the huge loss of traffic at some websites, people actually lost their jobs. Others had to change their operating procedures (check out the new guidelines at ezinearticles), and still others went on a massive pruning / adjusting exercise to address the pages apparently causing a problem and dragging the website down.

The other big deal, is that Panda is a shift in Googlethink (if that is actually a word). This is an oversimplification, but historically the Google algorithm has been using incoming links (called backlinks) to a website to measure how important that website is; especially if those links that were from an “important” high PR (page rank) site. However this approach tended to favor big, we cover everything, websites over smaller sites that had great content but not as developed backlink profile. Sites that did well in promotion (gathering those backlinks) floated to the top of the search results, but their content wasn’t always the greatest. So people had been complaining for a while about this. Panda was an effort by Google to make page quality more important when determining what to show in the search results. It still looks at backlinks to a site, and the on page optimization (ie. page titles), but now page quality is a factor too. A lot of the discussion on Panda has centered on what is exactly meant by page quality. It’s not just original, high value content, design and ad placement seem to matter too.

A lot of the large “content farms” and article directories were hit. And a number of ecommerce sites with “thin” content were affected as well. Ecommerce websites have unique SEO problems in this area, especially those with large catalogs. It’s a lot of work to write unique & fresh descriptions for each product, and many ecommerce websites just show the manufacturer’s description which just looks like scraped content to Google. Most active blogs were not impacted.

Bottom line: Keep writing great and useful content, get rid of any content that sucks; and if you use ads, don’t let them crowd out your content above the fold.

I would like to get your thoughts on what signals are used for measuring either content quality or user engagement..

It’s a good question, and one that has a lot of debate among SEOs. You might want to take a look at my more recent post, conversations about Google Panda which has pointers to indepth interviews and to the Google post that listed out questions to help judge a page’s quality. What Panda appears to be is an algorithmic application of quality conclusions human raters have made on a sampling of sites which I think makes it harder to reverse engineer it.

What do I think matters? Design, placement of ads, reading level, uniqueness and bounce rate to name a few. Walking through the Google list of questions and answering them for your site would be a good exercise. You can also let analytics tell you. If you have pages that have suffered post Panda, compare those to the pages on your site that have done well.

Kathy it seems that original content writers have been affected by the Panda update instead of the copy cats.

Yes, there has been a lot of reports of this. Per Eric Enge, on June 16th, Google updated Panda to improve scraper site detection. Have you checked recently?