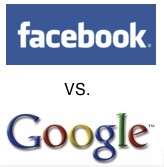 A few weeks ago, I wrote a post called “Google is Shaking Things Up” where I reviewed some of the major changes Google has implemented in 2010, including the new focus on local search. Google’s furious pace of changes is being easily matched by Facebook, as the two tech titans are squaring off in an epic battle that will be one to watch, the missing gmail import skirmish perhaps a taste of things to come.

2010 is the year that Facebook came out from its walled garden, it’s no longer just a destination site that you hang out in, now Facebook is out and about in the wild. It started with the April announcement of a partnership with Yelp, Pandora, and other sites to share your data with those sites via a feature called “instant personalization“. Later I started noticing that you could use your Facebook login details to log into meetup.com, among other sites.

But what really got Facebook out into the Internet wild was the “Like/Recommend” buttons that was a hit with many websites. Corporations rightly realized this was a way to get site visitors to spread the word about their messaging and web content among their friends and the buttons were adopted like wildfire. The premise is core to the basic Facebook philosophy, in that people trust referrals from friends above all else. Contrast this with the Google philosophy, which is about discovering what is popular and authoritative in the websphere and getting that in front of the searcher.

The latest from Facebook is Facebook messaging. Facebook users have always been able to message one and other privately, the new feature takes that one step further with the addition of an externally available email address that matches your username, and also by interweaving your chats and texts into one central place . This is a shot across gmail’s bow (even with the recently introduced “priority” feature) and it could be a category killer impacting yahoo and hotmail as well. I wonder what it will mean to the email marketers, as facebook messaging prioritizes messages from your friends above any emails you get by being on a list.

Have you registered for your @facebook.com email account yet? It’s being rolled out in phases, but you can register now at: www.facebook.com/about/messages/. (I wonder, will having a gmail account delay or hasten the time I get my invitation?) Otherwise you can wait until a “Claim Your Facebook email” link shows up in your Messages view.

I love this — it is war!! Goliath Google against David-esque Facebook….I am excited to see what else is up their sleeves??

I find all this very exciting too. I’ve had the like button on my blog for a while and it gets used quite a bit.I have registered for the email account as Facebook is by far my favorite social networking site but I have gmail too so I’ll be interested to see if they roll those out early to entice us away – hehe.

I’m still a little bit confused by the Facebook email. Is it simply a tool to consolidate all things Facebook, or is it one more email to manage that replaces a yahoo or hotmail account? Oh well, I’m sure I’ll figure it out. Informative blog.

Hi Sharon,
It appears to be “one more” email account to replace yahoo or hotmail. The difference is that you can have chats and texts interweaved with email in your inbox (similar to gmail chat), and that your friends get priority treatment. Hope that helps, we will find out more when we can get our hands on it!.

WOW– Thanks for the info and comparison! This is all so interesting to me. I’ll register as well for my facebook messaging and see if gmail accounts do in fact get put on the back burner;)Facebook is my social media of choice as well for both personal and business.
Yvonne
http://www.facebook.com/wildforwildtree

sigh, oh my! For me I definitely do not want a facebook e-mail account….but I do like the idea of the “like” button on my blog site. I’ll have to check it out for sure. I use like all the time to let people know I stopped by and like something they posted with out having to take the time to leave a comment. Does liking a blog post help position the blog the same way comments do on google?
Hmmmmm food for thought

Sounds as though Facebook is hijacking the entire internet. I really do not want yet another email account to manage. Thanks for the info.

I have to say I am a little perplexed and confused by all the changes going on in the internet world, and hope someone can sit me down and explain and help me know what I should use and what I don’t need! So glad people like you are up on all of this and can share it with the rest of us that wouldn’t know otherwise!

Hi Irene,
Liking a blog post doesn’t help with ranking with Google, at least not directly, but it does drive more traffic to that blog. And some of that new traffic might link to the blog which does help.

Thanks for telling me that what I write helps! The challenge with technology is that there are usually multiple ways to get something done. Here’s how I approach it: Always start with a business reason for what you want to get done … that fits in an overall strategy .. then look for the technology solution that fits!

Lisa Ann Landry
Vibrating Positive Energy to Unleash the Genie in All
http://www.myshoppinggenie.com/pstd/

Sigh, I’m with Irene. I’m so sick of facebook. I really don’t like posting personal things on it, and I don’t like the closed system it’s trying to hook us into. I have a fan page mainly because I’m told I have too. I like being out in the big google blog world much better. I won’t use facebook email.

Line me up with the people who don’t want another e-mail and wish there weren’t such a moving target with all the changes. I do appreciate learning more about the Like button, which I want to add. But I’m not rushing to do messaging or anything else grand with Facebook. Of course, ultimately we all will have to be willing to adapt and change, because that’s the nature of the social media world!

I do get the feeling that FB is trying to be all things to all people, which could be a mistake. You can’t blame them for trying, tho.

I loved this post. It’s great to have this ready comparison in an easy-to-understand manner. I’m gradually working my way through things, trying them out and enjoying having little successes here and there. Thanks a lot!

I definately don’t need another email account, I have my main one and then a gmail account for when I have to register with an account, or any time I have to provide an email address that is not connected to my main business. I check my gmail account much less frequently, but it keeps my main mailbox free of clutter which I greatly appreciate. It has been a great time saver.

I always look forward to new Facebook applications and capabilities. How far I have traveled from that day nearly two years ago when I reluctantly signed up for Facebook — and now I am completely addicted. Great to hear about what is around the bend!

Not really seeing the necessity of the FB email…it does really “feel” like FB is “out in the wild” and they ARE wild. It takes me awhile to wrap my head around things, so I’ll wait and listen then decide.

I love all the exciting energy involved in new creation and design no matter the medium. Google has to make way for the new kid on the block, its the wild web wars. I like the like button and all the advantages therein. I will probably land up with facebook email since it makes sense when connecting with people on facebook.
Email is almost a dinosaur at this point in many ways.

I’m one of those rare individuals that doesn’t use gmail or yahoo for email. I can see the opportunity Facebook has to expand it’s influence by integrating email but don’t really understand how it is any different than the direct messages. It will be interesting to see how it all unfolds. Thanks for keeping track and reporting back.

Hi Julie,
Yes, I thought about mentioning that, FB is definitely planning to take on Google with it’s search (which is already there, look at the top of your page). Each “like” whether inside or outside of facebook gets noted by FB search so that it can provide search results tailored to your interests.

BTW, did you notice the new draggable FB button you can put on your browser bookmark bar?

This is so much fun being an observer while everyone is coming up with all these brilliant ideas. Whether they work or not is always a question, but what fun watching it all unfold.

Thanks Kathy Alice for another great explanation of the world of the internet. What do you personally think? Are you going to use the new email? For what purpose? At some point, will it ever stop?

Initially I am not planning to use facebook email extensively.

However I go where my clients and audience go, so if is a big success, then I will be there as well.

And no, I don’t think it will ever stop 🙂

Understanding Technology Trends, the Overwhelmed "Do Me" Trend | Making Sense of the Web says January 3, 2011